Bayes rule illustrated by a table

I just found this excellent illustration of Bayes Rule, in a book “Bayes’ Rule with Python, by James V. Stone, and thought I’d share it here, as a follow-up to earlier posts on Bayes rule, e.g. this one.

Assume we have examined 200 people, and found 10 different diseases and 4 different symptoms. With that data, we can come up with a table like this:

We have the diseases in columns 1..10, and symptoms in rows 1..4, and each cell in the matrix represents the number of people having that disease and showing those particular symptoms.

Below a joint plot of the data: 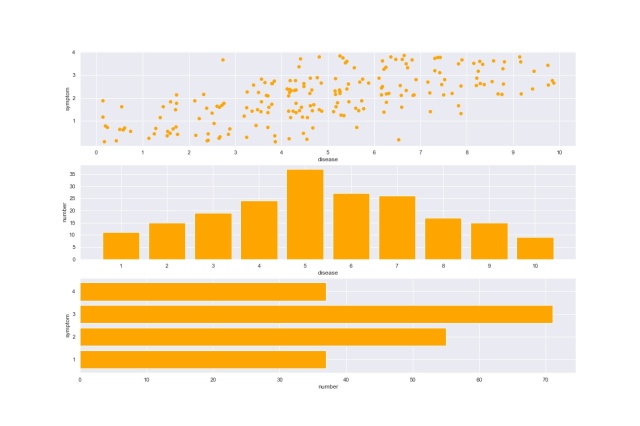 As you might recall, Bayes rule is expressed by :

What I like about the example from the book mentioned above, is that the table clearly demonstrates how Bayes rule comes up, let’s have a look:

So, we want to find p(A|B), that is the probability for having a particular disease, given that we have some specific symptoms.  Having the table above, makes this very easy: let’s say we have observed symptom nr 3 (in row labeled 3)  and and want to know the probability, given these symptoms, that we have disease number 5.

So using Bayes rule, we can express this as:

Now, we can easily lookup each of the right hand terms in the table above:

What’s interesting is that we, instead of all the above calculations, can also read the posterior directly from the table: since we are looking for the probability of disease_5 given symptoms_3, we can see the ’16’ in that cell. So, the probability for disease_5 given symptoms_3 is the number of people in that cell (16), divided by the total number of people having symptom_3, which is 71, and can be read from the last column, which btw, when dealing with probability distributions, is often called ‘marginal probability’ for symtoms, while the last row in the table is called marginal probability for diseases.

The dashed lines between the circled numbers in the table illustrate the key components of Bayes rule, the prior, the posterior the likelihood and the marginal likelihood:

Since I just mentioned the marginal probabilities, let’s convert the table above to a probability distribution, by dividing each cell by the total number of people:

With a bit of coding, we can apply the logic described above to arrive at the posterior distributions for all diseases, given the symptoms:

And finally, we can also look at the priors, likelihoods, and posteriors in a really messy graph 🙂

If you look at the first table above, the one with the absolute numbers, and recall the ‘shortcut’ to Bayes rule, that is, dividing the number in the cell with the marginal likelihood, you should be able to figure out why a higher likelihood doesn’t necessarily result in a higher posterior probability.  Also, thinking in terms of ‘True Positives’ vs ‘False Positives’ might be of help… 🙂